This is the first in a series of articles spotlighting the 20th Street Biophilic Streetscape, the sidewalk garden in front of Salumeria, central kitchen, and Southern Exposure Gallery. This garden was installed in October of 2012 by volunteers and is tended by the tenants, with some professional help.

Here in late July the dry season is in full effect, tempered by our cool fog. Several of the native and drought-tolerant plants have finished blooming and are going to seed, but there are still plenty of flowers to be seen. Here are a few:

Sea lavender (Limonium perezii), above, is native to Tenerife, in the Canary Islands, and thrives in coastal climates. The papery purple and white flowers bloom throughout spring and summer and sometimes beyond. Cut flowers dry well, making them a long-lasting indoor ornament. Ironically, sea lavender is a threatened species in its native habitat, but may become a weed in some coastal habitats in California. So avoid planting in the outer avenues, where it might escape to the beach. 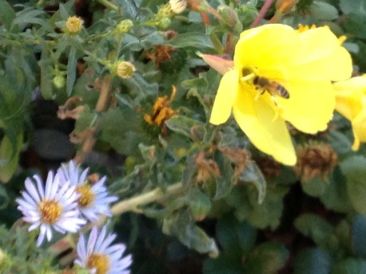 Just coming out of bloom but worth mentioning is Hooker’s Evening Primrose (Oenothera elata hookeri), above, a California native. (Oenothera is Greek for “winescented” – how appropriate for a restaurant garden!) Hopefully you enjoyed the tall stalks with flashy yellow flowers earlier this year. Each flower lasts only a day, and the bees enjoy it while they can. We let the old stalks stand a while after flowering because they produce seeds that travel and grow elsewhere in the garden. It’s always a surprise to see where the next plant will turn up.

On Florida Street, you might not notice the little plants pictured above if not for their flamelike flowers on stalks about a foot high. It’s almost like they are sending up a signal saying, “Hey! I’m here!”

These succulents are called Echevaria nodulosa – or Painted Echeveria – and are native to high-altitude rocky outcroppings in Mexico. The thick leaves form a rosette shape and look as though red lines have been “painted” on them.  Grow them in full sun or part shade, in the ground or in pots. 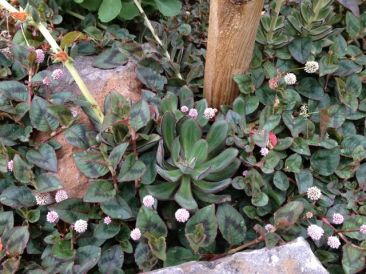 Succulents store water in their leaves, making them perfect choices for the low water use garden. Many are damaged or killed in extended frost temperatures so we are lucky in this climate to be able to grow succulents outdoors year-round.

Those are just a few of the mid-summer highlights, but things are always changing. We hope the next time you visit this block on 20th Street you’ll have a deeper appreciation for the space. Til next time, keep your eye on the garden!

Ellyn Shea is a gardener and garden consultant in San Francisco.